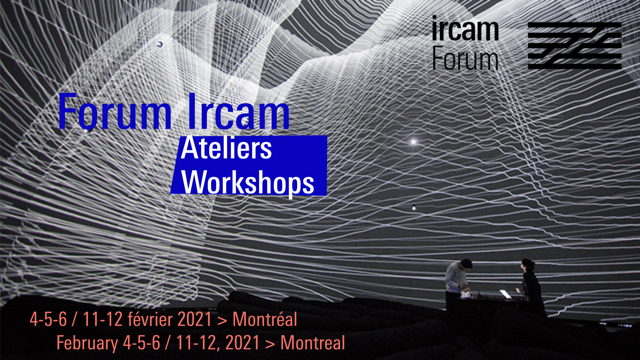 The proposed collaborative artistic research project has explored and developed the notion of spatial sound synthesis from artistic and perceptual viewpoints, truly amalgamating spatialization algorithms with sound synthesis engines according to an integral musical idea or approach:

Exploring spatialization beyond the prevalent concept of sound source spatialization, such as extended sources (with extension and shapes), spectral spatialization techniques, also the notion of a “synthetic-soundscape” in the sense of working with densities and distributions in various synthesis dimensions (in frequency as well as in space).

To this end (as for the technical realization), composer Nuria Gimenez-Comas has used graphical descriptions of mass densities with the sound synthesis and spatialisation tools in Open Music.
Marlon Schumacher’s contribution will be dedicated to r&d of new tools informed by cognitive mechanisms studied in spatial auditory perception and scene analysis. more precisely the OMChroma /  OMPrisma frameworks, combining synthesis/spatialization models, perceptual processing, and room effects.

The novel sound-processing framework of the presented tools allows building complex dsp-graphs directly in the composition environment. This extends the compositional process to a virtual “lutherie” or “orchestration”, blurring the lines between musical material and instruments.

The framework provides the possibility of designing controls for higher-level spatial attributes, such as diffusion, sharpness, definition, etc. Concretely, the project explores combining spatialization systems in an unorthodox loudspeaker setup to synthesize a broad spectrum of “spatial sound objects” ranging from close-proximity sound sources to distant textures or ambiances, which the listener is free to individually explore and appreciate.
The idea is to create not only the sensation of given sound sources projected into space but multiple spatial sound morphologies around and within the audience, that is densifying-increasing, in different emerging sound layers.