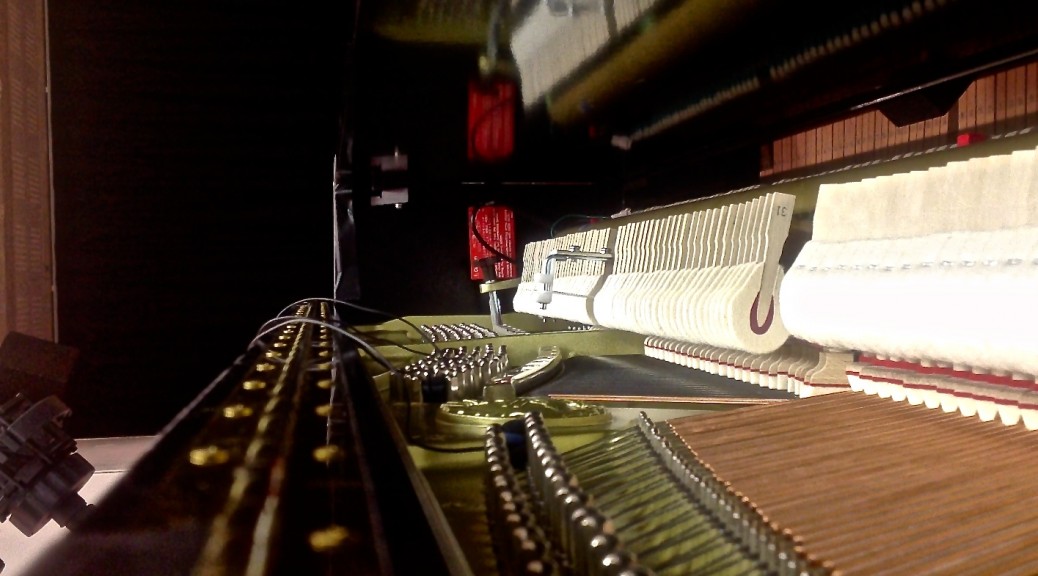 This piece is an experimental reflection on the predisposition of the human mind for conceptualizing the world through meanings and relations in order to make sense of perceptual experiences.

It was composed and recorded in spring 2013 at Ircam (Paris) as part of a larger scale art project. Source material is an acoustic recording of fine artist Franziska Koch, in which cleaning actions on an upright piano, akin to a piece of furniture, become performance. What can be heard is a gestural language of sonorities ranging from the lightest touches, to frictions and wiping gestures, to percussive knocking sounds and hits against the resonance body of the instrument, resulting in a characteristic rhythmical texture which connects the sounds forming an abstract structure.

Using digital-signal-processing techniques (corpus-based sound modelling via the library OM-Pursuit, see e.g. this article [1]) the recording was virtually deconstructed into timbral layers consisting of sounds from databases of sounds collected from the “inner life” of the piano, such as noises of the mechanics, resonances, knocks, prepared piano sounds, etc. (carefully recorded and selected using the library OM-SoX [2]). Following a formal strategy (combinatory matrix) these layers were then recombined into 6 individual fragments, each with their respective timbral and structural characteristics.

Complementary to the electronic orchestrations, following a recursive decomposition algorithm (i.e. modelling a recording of piano sounds via atomic decomposition with piano sounds), a symbolic piano part was created, consisting of individual layers of extreme dynamic contrast. Due to analysis/synthesis parameter combinations, fragment-like, miniature piano pieces are created – each typified by characteristic sonorities and structures (horizontal/vertical relationships, polyphony, ostinati, etc.) which to the open-minded listener seem to allude to various musical styles and genres (such as dances or jazz-improvisations). Certainly, the gestural qualities of the original recording are perceivable.

These algorithmic “orchestrations” form the electronic (tape) counterpart to the live-interpretation: the “score” consists of a videofile, which instructs a performer/s on the grand piano –guided by a moving cursor— to interpret a custom symbolic notation (developed in the OpenMusic environment for computer-aided composition).

Due to its abstract character, the piece has been adapted and performed in various versions, such as in 2017 for a single pianist and gesture-controlled real-time spatial diffusion in higher-order ambisonics. In the presented version for computer-controlled piano (Disklavier) solo, the electronic orchestrations are “stripped off”. What remains is a kind of “relief” of the compositional process; a recursive skeleton of sounds, which points back to the sonorities of the original recordings and therefore inevitably enters into a dialectic with itself.

The original recording of Koch’s performance, as well as electronic materials and related works are available through the Swiss publisher Edition Fink. The software used for the composition of this piece is free and open source, more information on the Development section of this page.