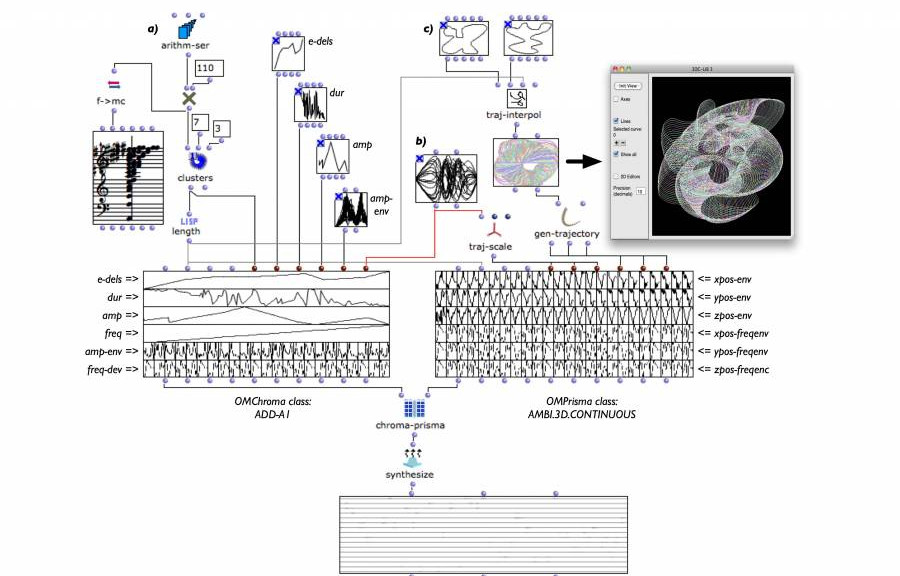 Version 3.0 (not released yet)

Thanks to advanced object-oriented programming features in OM, the hierarchical model of the descriptor space proposed in SpatDIF can be implemented as a structured system of classes following a multiple-inheritance scheme. The different layers of descriptors (Core Descriptors, Extensions, User-Extensions) are represented as abstract classes and inherited for a given spatial sound rendering class. The figure below illustrates the inheritance scheme for a VBAP class in OMPrisma.

On the left of the figure we see the inheritance scheme for Core Descriptors –which are common to all OMPrisma classes. At the top is the abstract superclass cs-evt with 2 slots describing the start time and duration of a rendering process (all rendering needs to start and end at some point). The class spat-evt inherits the slots from cs-evt and adds new slots for sound file playback parameters (every spatialization process requires a sound). The prisma-evt class inherits the slots from spat-evt and adds slots for describing sound source positions (every spatial sound source must be located somewhere). Prisma-evt contains all Core Descriptors and is the superclass for all spatial sound rendering classes in OMPrisma. We can also see 2 Extensions in the figure. Prisma-dist is another abstract superclass with slots for the control of perceptual distance cues (corresponding to the Distance Extension in SpatDIF). The superclass prisma-vbap (on the right of the figure) adds slots for parameters specific to VBAP (corresponding to the VBAP Extension in SpatDIF). The final OMPrisma spatial sound rendering class (OMPrisma VBAP class in the figure) inherits the Core Descriptors from prisma-evt, the Distance Extension from prisma-dist and the VBAP Extension from prisma-vbap. By means of this inheritance scheme a structured abstraction layer is implemented which reflects the hierarchical model proposed in SpatDIF, is consistent for all spatial sound rendering classes in OMPrisma, and can be easily extended with new ones. Combining this inheritance scheme with CSound functionalities for Macros and UDOs (User-Defined Opcodes) new spatial sound processors can be quickly prototyped and implemented thanks to code-abstraction and OO-programming.

Artistic Works (needs to be updated)

OMPrisma has been in use for over 10 years for the composition and realization of a variety of works, most notably: